As part of the Buffalo Sewer Authority’s Long Term Control Plan, it was determined that traditional approaches to combined sewer management would not adequately serve the city in the long-term. They began the process of identifying sites around the region that would greatly benefit from redesign, particularly those that could utilize green infrastructure. Willert Park was one of the sites chosen.

The overall goal of the project was to reduce the amount of stormwater entering the combined sewer system, and the project team selected Willert Park project site, which was designed to be resilient and adaptive to the expected changes in environmental conditions. This project is known as The Willert Park Green Streets Project, which includes three main sites, William Street, the Pratt Willert Community Center, and the JFK Community Center.

The project improved environmental quality by replacing impervious and gray infrastructure with pervious and green infrastructure. Improvements also increased stormwater infrastructure capacity within the project limits. A traffic assessment was completed on William Street to reveal that it was a candidate for a road diet. Porous asphalt was installed in the parking lane on the north side of the street and new bike lanes to reduce runoff and provide stormwater treatment. The median was widened from 15 to 38 feet and now features plantings including 64 new trees and bioretention sites to manage stormwater from road runoff. At the Pratt Willert Community Center, impervious surfaces were removed from the parking areas in favor of the installation of bioretention sites known as rain gardens that prevent rainwater and snowmelt from entering the sewer system while also aiding in the beautification of the community. These gardens also serve to educate residents on the benefits of green infrastructure and are featured as part of the Water WORX Community Education Project, a collaboration among the Buffalo Sewer Authority, Community Action Organization, and Joy Kuebler Landscape Architect. These impactful improvements to the community were developed in genuine collaboration with stakeholders and community decision makers, the project owner, and the project team. A public engagement plan was developed and followed throughout the planning, design, and construction phases in order to elevate community awareness and pride for the project that will last long after the project is closed out. 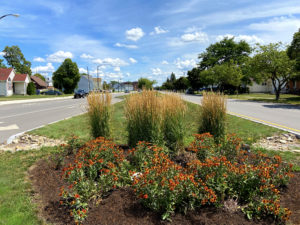 The original conceptual design for William Street ended before reaching the intersection with Michigan Street. Key project stakeholders, including community representatives, were concerned that the project did not include any signature project elements that incorporate art and the Michigan Street heritage. Based on this input, the Buffalo Sewer Authority decided to extend the project to Michigan Street. Community leaders asked that the culturally significant Jesse Clipper Park, located at the intersection of William Street and Michigan Street, become an anchor for this end of the project. Over the years, the original Jesse Clipper Park had been encroached upon by the urban street network. The park sits in Jesse Clipper Square, which honors Cpl. Jesse Clipper, the first African American soldier from Buffalo to lose his life in WWI. Before being drafted, Jesse was a performer in a Vaudeville group and the Vice President of Musicians Local 533 in 1917. He went on to serve in the 317 Engineers Corps in France. In 1919 Cpl. Clipper died in France and was buried in the Oise-Aisne American Cemetery in the Picardie Province. After his death, 15 African American WWI veterans founded the Jesse Clipper American Legion Post 430. On Memorial Day in 1935, the group dedicated Jesse Clipper Square in his honor and dedicated a monument to all of the African American soldiers who had lost their lives serving their country. The project team dug through archives to find the original park design by Buffalo’s First African American Architect, John E. Brent. The design of the park was then modified from the conceptual drawings to incorporate elements of John Brent’s design. In addition, a new piece of art, a silhouette of Jesse Clipper, was commissioned to sit proudly in the park. A new foundation for an existing monument dedicated to Jesse Clipper was also provided. The ribbon cutting ceremony for the expanded and redesigned park was held on Memorial Day in 2018. 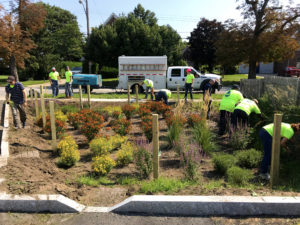 The final post-development stormwater storage capacity of the site achieves 90% improvement in capacity for previously developed land. This, in turn, increased wastewater treatment capacity at the Buffalo Sewer Authority Bird Island Wastewater Treatment Plant by eliminating stormwater volume from the combined sewer basin. The overall quality of life and resilience in the Willert Park community is markedly elevated by the improvements including impacts to the 2 Community Centers, Jesse Clipper Square, and to the safety and accessibility of neighborhood residents through the road diet, pathway construction, and water quality features.

Because of these sustainability and resiliency benefits to the community, the project is the recent recipient of the Envision® Bronze award for sustainable infrastructure. The Envision sustainable infrastructure framework assesses project sustainability across five categories: Quality of Life, Leadership, Resource Allocation, Natural World, and Climate and Resilience. These key areas contribute to positive social, economic, and environmental impacts on a community during the planning, design, construction, and operation of infrastructure projects. To earn this award, a project must deliver a range of benefits to the host and affected communities which are validated through a rigorous third-party review process against the Envision sustainable infrastructure framework. Wendel’s Scott Rybarczyk, PE, LEED AP, Project Manager, said that “The team did a fantastic job to make the Willert Park Green Infrastructure project a showcase of sustainability and green design. This award is the culmination of years of hard work that led to a project that provided stormwater management, improved parkland, and better community relations/education. I am very proud to have been part of this team”.